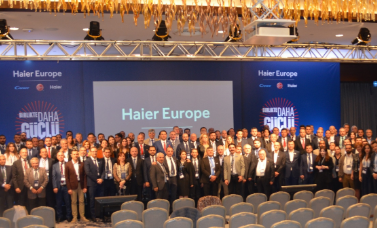 As you may remember, back in 2018 the Chinese company Qingdao Haier, one of the world’s white goods giants, acquired the Italian white goods producer Candy Hoover Group. This acquisition move by Haier to increase its competitive power worldwide is also highly important in terms of Turkey’s status in the world, as it is the second biggest producer of white goods after China.

The first Suppliers’ Day after this acquisition was held in Istanbul and attended by over 400 individuals. During this special meeting where future plans are shared, significant information was gathered from the top executives of Haier Europe.

First of all, Haier Europe CEO Mr. Yannick Fierling took the stage to give a presentation on a broad perspective starting from the foundations of Haier and Candy-Hoover to the acquisition process and expectations regarding the acquisition. Adorned with impressive videos, the presentation received much interest. He underlined that this acquisition was not the first acuisition by Haier and the company achieved significant mergers in the past which are still up and running. He especially emphasized that the wheel is taken by the professionals in the country where such acquisitions are made. He explained that in this new Chinese-Italian merger, their strategy is to bring out the best assets of the two parties and not to sacrifice quality and to have a say in the world. He underlined how they care for customers with their motto ‘we sell experience, not product’.

Next, the executives of the Washer, Cooker and Cooler Business lines gave us detailed information on their units.

Lastly, the Group Purchasing Director Corrado Lo Maglio took the stage to share that as a group they foresee a big change in quality and that they want to lay a claim on that and the supply chain is the area where the most claims are laid; therefore, they expect support and devotion from their suppliers. He clearly expressed his message for awaiting their most competitive prices.

At the end of the program, the dinner was served and the Supplier Achievement Awards were presented.

Almost all of the invited suppliers were also BEYSAD members on that night. We were particularly proud to see all the awarded companies were among our members. We celebrate all our members, wish them a continued success, and hope they set an example for all the other members.